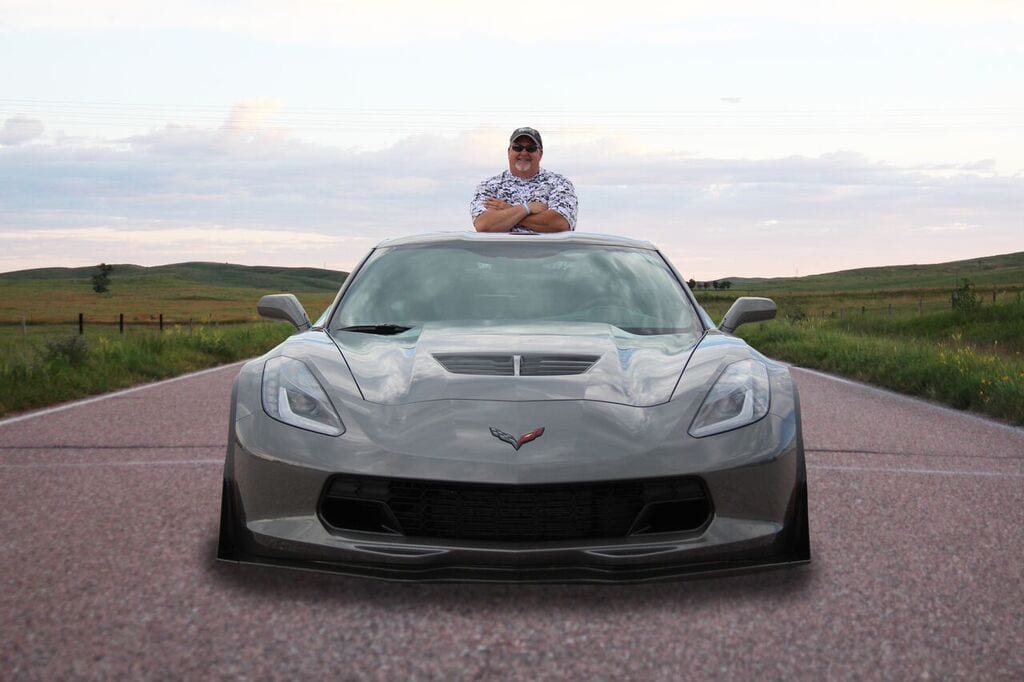 16-ish, have sat down several times with several people to try to figure that out.

Dave Carpenter brought me out as his navigator in the M&M NASCAR. I had been to several other races with Dave. When I looked at the race road for the first time, I swallowed slowly and said to myself, “We’re going to drive this car on that road? No flippin’ way.” The rest is history. The race was bitchin’. The village was great. The people were better. The fun never stops.

It has mainly been Corvettes.

It was like buying a race car with a warranty. The car was built for this kind of fun. Always thought that the car had so much more potential than I had as a driver. Plus, they looked bitchin’!

Have had others, did drive the M&M car. That car STUCK to the road. Been in a Noble, loaned by Ted Hughes when our car broke. That was like a go-cart on steroids. Several different years of Corvettes. Also have raced a Jeep Trackhawk and a Challenger SCAT Pack.

Been a race junkie since a teen. Did Formula Ford. Formula Mazda. Some Sedan track stuff. The open road racing had always interested me. Had known about the Silver State race for years but never pursued it when I was young. So one year I found myself in Cabo in Mexico. This was a rescheduled vacation because of a hurricane in Jamaica. I was at the swim-up-bar, drinking “Blue Drinks.” Met a guy and started a conversation. Discussed several common interests. This guy was telling me about several races throughout the states. I figured this guy’s so full of BS, but the Blue Drinks kept being consumed. The next day, now somewhat sober, ran into him at the pool. A more serious conversation took place. He invited me to navigate for him at the Pony Express Race in Battle Mountain, NV. I WAS HOOKED. Never looked back. That guy was Dave Carpenter.

Have done bar stool racing. Not much else now.

One of my son-in-laws came to Arnold to navigate one year and loved it. They all love the cars I have. My grandkids refer to me as race-car papa.

Start earlier in life. Go to every race you can. Ask a lot of questions. LISTEN!

Start sooner in life. Go to all the races I could. Ask more questions. LISTEN! Except to Mr. Nice, AKA Joe Shown. Just kidding, Joe.

I will never forget this. A rain delay at the Loup 2 Loup. To help get the race finished, they told us they would score only the return leg. Half of the classes were at the north end. The fast guys were told that we could race north to about mile 6. The command post, where a fire truck would be with the lights flashing. Then the road north of that was still to wet. So slow down and continue to the finish. Well, off I went. No navigator this time. Got to the fire truck, saw the lights, but the road ahead looked dry. So I continued at speed to the next turn which was a hard right. Just before that corner I saw how wet the road was. Got on the brakes, still going too fast for conditions, started to turn and the car did not want to. Headed to the ditch. First thought, this is going to hurt. Second thought, this is going to be expensive. Third thought, I’m going to have 80 pissed off racers for the red flag. As the gravel was making noise on the car, I got back on the throttle. Front end started to steer, a lot of dust, but kept her going. Got to the turn-around, white as a ghost, sweating through my driver’s suit. Some say I wet myself. Couldn’t get out of the car. Ted and Jared came over and Jared said, “What’s wrong, you don’t look so good!” I was very lucky. Remember the word I said earlier in a question. LISTEN! Talked to a course worker later. They said they could not believe I wasn’t in the ditch. I’ve always said I’d rather be lucky than good. That was all luck.

It’s as good as sex.

Don’t know. I have grandsons, so maybe.

I am now living most of the year in Arnold. I wake up every morning “Living the Dream.”